Jessica's "I am Oneinforty" Story

I am one in forty. This is my story.

In 1996, when I was 10 years old, my mother died of breast cancer on her 36th birthday. Her death, along with the fact that her grandmother and two great aunts had also died of breast cancer, prompted my aunt (my mother’s sister) to get tested for a BRCA mutation in the early 2000s. She had the BRCA1 mutation and, after ultimately deciding to have a preventative double mastectomy and oophorectomy, is cancer-free today. I was still in my early teens at the time this happened.

Beginning when I was 18 in 2004, my primary care physician (who was aware of my family history and, like far too few PCPs, of the importance of getting tested) began encouraging me to have the simple blood draw that tests for BRCA1 and BRCA2 mutations. But I was afraid. I went to college, graduated, and lived for 8 years afterward in the Boston area before finally deciding to get tested in early 2016, a few months after my 30th birthday. The test came back positive for a BRCA1 mutation–unsurprising given my mother’s cancer and her sister’s BRCA-positive status, but jarring all the same. 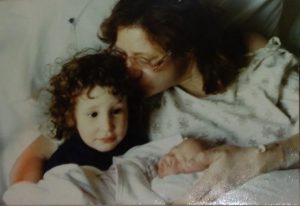 I knew I had to do something. I found that the decision to have a preventative double mastectomy was relatively easy for me, though I know (and can understand why) many may struggle with it. My direct-to-implant surgery was on October 5, 2016 with a follow-up nipple reconstruction on March 10, 2017. (I will have an oophorectomy when I turn 35.) I was lucky that the stars aligned for me and I was able to have this all done quickly: my mother got sick when she was 32, meaning I could potentially get cancer at a young age, too. I am also grateful to have had my surgeries in 2016 and early 2017, considering the current political climate and the uncertainty surrounding health care, and specifically women’s health.

Today, I am doing great. I worried, as I suppose more than one young woman who has faced this surgery has, whether I would ever find someone who could love my “new” body. My boyfriend and I started dating in February 2017, just four months post-mastectomy (because you can’t really plan these things, can you?). I told him upfront about the surgery when we started dating; I didn’t want to waste my time with someone who wasn’t okay with it. He was there when I woke up from my nipple reconstruction and has been by my side ever since.

I consider myself lucky in so many ways: to have found out about the mutation, to have done something about it before it could hurt me, to have a supportive family and partner. I hope that through the work of Oneinforty, there will be many more women like me–especially younger women–who find the mutation, if they have it, and can make choices regarding their health before cancer makes the choice for them.